An Election Perspective From The Pitch

Coaching is like childbirth. During the week with all the emails, parent complaints, lost shin guards and games you should have won but lost anyways – every year I throw up my hands and say ‘I’m not doing this again next year!’

But then next year when the emails start circulating calling for coaches, you remember. You remember when your player scored his first goal and he turned and looked at you with a huge look of surprise on his face and beamed. You remember the first time a child challenged a ball, AND WON, and saw them realize ‘I get it now, I can do this’ and they never play soccer the same again. It’s these moments that haul us back.

I like so many of you, spent Tuesday evening and all of Wednesday walking around in a daze. I considered cancelling our Wednesday practice. My eyes were puffy, and I had only had 3 hours of sleep. But I also knew it was exactly what I needed, and what the boys needed and probably what their parents needed too.

This is team Costa Rica. They are a thoroughly average team. Depending on the day they are either the best team or the worst team to ever mount the pitch. We are dead center 4th out of 8th. We have great quarters where we pass and play and score. And then the following quarter for no apparent reason, we sleepwalk and discuss Pokémon with our teammates as the ball is dribbled past us. It’s infuriating. I love it. 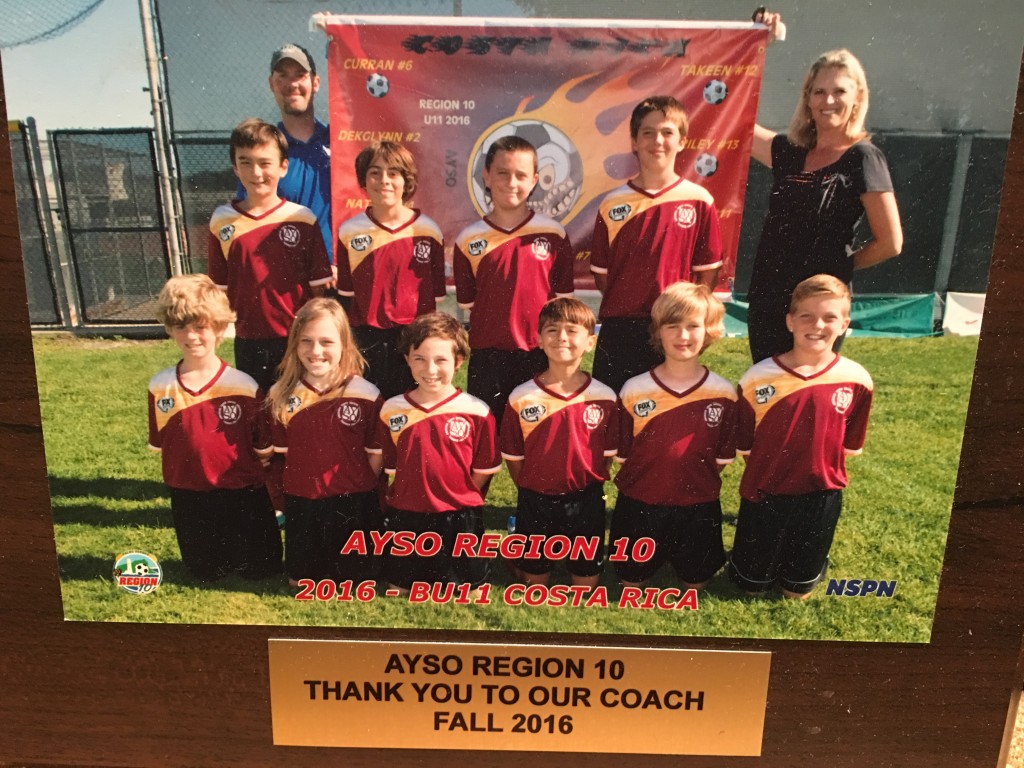 At last night’s scrimmage there was an indirect kick awarded the other team and my boys started chanting “build a wall, build a wall” – and they laughed. They laughed the way children laugh when they think they are telling a joke that is just meant for adults, but are secretly wanting to tell you they are in on in too.

It broke my heart.

Those last four paragraphs should bother you. A lot. And if they don’t and you have consumed enough of this toxic rhetoric to rationalize this campaign’s behavior, if you have failed to see firsthand how this campaign and this president elect have poisoned our childrens’ minds then I don’t understand you. Do you know how much work the teachers, parents and coaches have to do to untether them from these kind of statements. Adults, hey, you are on your own. Listen, watch, vote for whomever you choose and who best represents your beliefs. But your children are listening. They are looking for role models and how to behave. And those that put this man in office have failed them.

In counterpoint, last week we played the team known for their offensive language. In our pregame huddle, I said “now remember guys if they start calling you bad names…” and was about to say “let the refs know”…one of the boys jumped in, “I know Coach Whitney, if they go low we go high.”

The soundbites of our leaders are the ear drops of our children, they wormhole into their ears at night and become thoughts and opinions the day after. They matter. They matter so much.

But regardless of the damage this campaign has done, I have hope.

You see, these kids: Ryan, Curran, Jacob, DJ, Sam, Colton, Dekglynn, Nathan, Wyatt and Riley are gentle young men. They are sports men. They are kind. They always take a knee when someone is injured and they shake hands with the other team whether they win or lose. They speak kindly to each other and about each other. They are filthy and they smell and their socks don’t match. But they glow in their love for the game and their team. They are outstanding young men.

If these are the men of our future, then we are going to be okay.